When the Central Markets moved out of Paris, they left three gaps behind. The fruit and vegetable market has been replaced by the Forum des Halles; the Southern Cattle Market is now the Parc Georges Brassens; but the biggest of all, the Abattoirs of La Villette, has seen the most spectacular transformation. The principal features of the old abattoirs were the two market halls – one for sheep, one for cattle; vast cast-iron and glass buildings which, unlike those at Les Halles, have been preserved. The Cattle Hall encloses a space about the size of four football pitches. It has been used by Unions for mass meetings for some years, and continues to serve that purpose; but the sides of the building have been split into a host of small exhibition halls, studios, offices, etc., including a photographers’ gallery. The open spaces of the area, where the animals used to be kept between market and slaughter, are now a park; on a little hill stands the DRAGON, a vast wood and metal sculpture you can climb all over, with the longest slide in Paris for its tongue. Where the animals used to become meat are new buildings; an inflatable concert-hall (6,000 seats) for pop concerts and a multi-screen cinema among others; but the biggest and best of all is the CITÉ DES SCIENCES ET DE L’INDUSTRIE, a really enormous Science and Technology Museum that’s not about the history of Science, but about science NOW. The Aerospace section is particularly spectacular. Lots of hands-on demonstrations here, audio-visuals in plenty. Even those who don’t speak French can get a lot out of this place. The same goes for LE GÉODE, the simplest building in Paris; a hundred-foot stainless steel sphere. Very shiny, though heaven knows how they keep it polished. Inside it is one of those cinemas where the film is projected all round the spectator, who cringes in his reclining seat and really gets into the centre of the action. 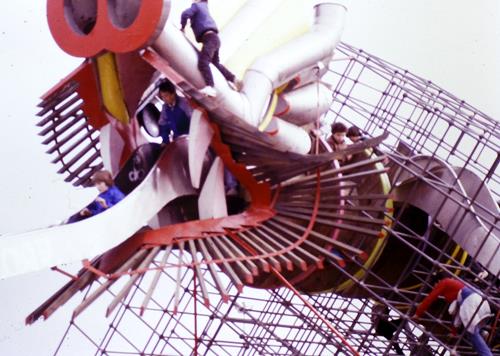